The US government is considering a plan to allow wireless firms to share radio frequencies used in weather forecasts.

As Hurricane Patricia barrelled down on Mexico last October, forecasters at the US National Oceanic and Atmospheric Administration (NOAA) grabbed as many ­satellite images as they could to track its progress. But at least one crucial shot failed to download. A 22 October image from the ­Geostationary Operational Environ­mental Satellite (GOES) system showed a black swathe — no data — across most of the Pacific Ocean.

“You couldn’t even see the hurricane,” says Al Wissman, chief of data management and continuity operations for NOAA’s satellite and information service in Silver Spring, Maryland. “That’s how devastated the imagery was.”

The culprit was radio interference from mobile-phone companies. And the problem may soon get worse. The US Federal Communications Commission (FCC) is considering whether to allow a commercial mobile-phone company to share a crucial, additional set of frequencies that NOAA uses for time-critical weather transmissions.

If the application is granted, Ligado ­Networks of Reston, Virginia, will begin transmitting at frequencies between 1,675 and 1,680 megahertz. That overlaps with the ­communications range of NOAA’s next generation of GOES satellites, starting with the game-changing GOES-R probe that is set to launch in November. The satellite will transmit in three times the number of channels as do current satellites, providing images with four times the current resolution, and it will scan for weather events five times faster.

Last month, emergency managers, pilots, private weather forecasters and other groups flooded the FCC with letters arguing against the change. Researchers will discuss the ­proposal at a meeting of the American ­Meteorological Society (AMS) in Tuscaloosa, Alabama, on 21 July.

Wireless broadband has been a boon for meteorologists, who can now send crucial tornado, hurricane and other alerts directly to people’s smartphones. “But it can’t come at the risk of interrupting important weather communications that are used in order to be able to deliver the most accurate and reliable forecast,” says Jonathan Porter, vice-president of innovation and development at the private forecasting company AccuWeather in State College, Pennsylvania. Porter also chairs an AMS committee on spectrum allocation.

In general, the US government sets aside swathes of radio frequencies for purposes that protect safety and national security, such as weather forecasting. But in 2010, President Barack Obama told the various agencies that regulate spectrum-sharing to free up 500 MHz for wireless broadband use by 2020. In ­November 2012, a company that later evolved into Ligado filed a request to share the 1,675–1,680-MHz band.

Commercial mobile-phone companies are already transmitting at slightly lower frequencies, the 1,670–1,675-MHz band — a situation that has caused problems with NOAA data.

In a representative sample of GOES imagery taken between May and September 2015, the agency found that 3.6% of the data ­during that stream had been subject to interference. And in May of this year, NOAA clocked 30 events in which satellite transmissions had dropped out, either streaking or nearly obliterating the images. “We consider that to be unacceptable,” Wissman says.

In response, NOAA has begun to shift the transmission frequencies for the radiosonde balloons it launches to obtain vertical profiles of the atmosphere. It also redesigned an aspect of its GOES-R transmissions to be centred on 1,686.6 MHz, in the hope that this would be high enough to escape the interference.

But that change affects only how GOES-R relays its own imagery to Earth. GOES-R has a second job as a sort of internet in the sky, relaying data from 27,000 ground stations including stream gauges, tsunami buoys and seismic stations (see ‘Weather watchers’). If Ligado’s application is granted, that ‘rebroadcast’ service is likely to be interrupted — affecting forecasts of phenomena such as the spread of smoke during wildfires or the disruption of plane flights by volcanic ash. 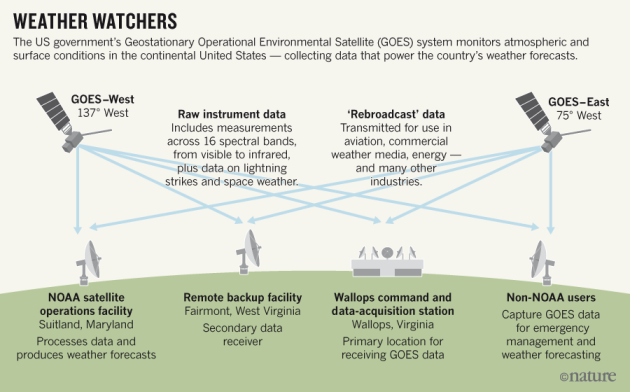 “It’s just an untenable situation to have in a critical situation,” says William Mahoney, an atmospheric scientist at the National Center for Atmospheric Research in Boulder, Colorado, and head of the AMS commission on the weather, water and climate enterprise.

One of GOES-R’s big advantages is that it will send updated data as often as every 30 seconds. That’s much more frequent than the 10–30-minute refresh time of the current GOES series, so any disruption to the real-time data flow will be much worse, Porter says.

Ligado has proposed ways to address the concerns, such as establishing blackout zones around NOAA’s receiving stations or creating a cloud-based computing network to handle data distribution for non-NOAA users.

But many of those who have commented publicly are sceptical about such plans. The World Meteorological Organization pointed out that cloud computing is vulnerable when weather data are most needed: during severe storms.

The FCC is accepting replies to the original set of public comments until 21 July. After that, it will grind slowly towards a decision.

In Tuscaloosa next week, meteorologists will sit down for a public discussion with representatives from Ligado about the best way forward. Mahoney, who will chair the panel, hopes that the government will proceed slowly — perhaps by delaying the bandwidth-sharing or at least phasing it in slowly and documenting any interference.

“This is not just, ‘Oh, a few weather forecasts’,” says Renee Leduc Clarke, a consultant with Narayan Strategy in Washington DC who has been working with clients on the ­spectrum-sharing issue. “This is equal to lives and property inside our economy — the same economy we’re trying to boost with wireless broadband.”