Spread of antibiotic-resistance gene does not spell bacterial apocalypse — yet

A ‘last resort’ drug to which bacteria are rapidly developing resistance is not quite the end of the antibiotic line.

TREND WATCH: Researchers have discovered that bacteria worldwide are sharing a gene that confers resistance to colistin, a 'last resort' antibiotic. Reports of the discovery originated last month from China, and have been followed by findings of similar resistance in countries including Denmark, the Netherlands, France and Thailand.

Although the findings are concerning, they may not be as catastrophic as many media reports have suggested, because colistin is only one of several antibiotics that are rarely used in humans. The discovery “is bad, it isn’t apocalyptic”, says Makoto Jones, an infectious-disease physician at the University of Utah in Salt Lake City.

Colistin was developed in the 1950s, one of a class of compounds called polymyxins. It is known as a last resort drug — physicians avoid using it when possible — because it tends to damage patients’ kidneys, says epidemiologist Lance Price at George Washington University in Washington DC.

As a consequence, bacteria have been slow to develop resistance to colistin, compared to other antibiotics (see 'The spread of antibiotic resistance'). 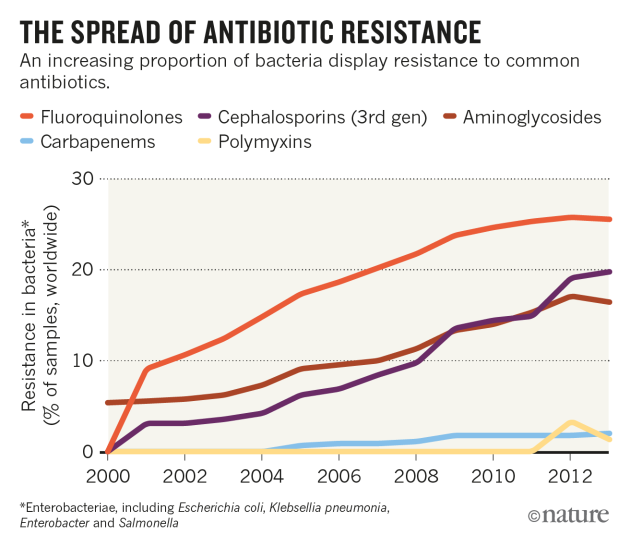 Source: CDDEP Resistence Map, based in part on data obtained under license from IMS MIDAS

Mutations that confer resistance to colistin had been reported previously. Many soil bacteria are also known to be resistant, because the drug is widely used in agriculture to fatten up pigs and prevent disease in farm animals. China, in particular, uses 12,000 tonnes of colistin a year in agriculture.

But the latest findings show that genes conferring resistance to colistin have been identified on loops of DNA called plasmids, which bacteria share readily with one another. Chinese researchers found a gene, which they called mcr-1, in Escherichia coli samples taken from multiple Chinese provinces, suggesting that it spreads easily; the same gene has now been found across Asia and Europe. Danish researchers have shown that E. coli can transfer its resistance to unrelated bacteria.

Not quite the last resort

Colistin is not the only drug that has been called a "last resort" antibiotic. That term is often used to refer to carbapanems, which have mostly been saved to treat only infections caused by multi-drug resistant bacteria. But carbapanem-resistance plasmids have been spreading between bacteria at an alarming rate in recent years.

Still, there are other antibiotics to which wide resistance has not been seen. Clinicians could  treat patients with classes of rarely used antibiotics such as tigecyclin, Jones says, or with combinations of drugs. (Like colistin, tigecyclin is toxic to patients.)

Furthermore, the power of bacteria to resist antibiotics exists on a spectrum; a larger drug dose might overcome an apparently resistant bug. Even bacteria that are resistant to colistin and other drugs are not necessarily untreatable superbugs; they may succumb to other drugs.

It is only a matter of time, however, before some kinds of infections may not be treatable with any of our current antibiotics. The US Food and Drug Administration has approved about half a dozen new antibiotics in the past two years, and about 30 more are in the pipeline. But most are similar to existing drugs and may not work any better. The most recently discovered class of antibiotics, lipopeptides, was identified in the late 1980s.

The discovery in January of a new antibacterial compound, teixobactin, was met with great excitement. It is produced by soil bacteria and has a different killing mechanism from other antibiotics. But it will be years before the compound is developed into a drug and proved safe in humans, and it will not be useful against gut bacteria such as E. coli because it kills microbes that have a different type of cell wall.

To encourage companies to develop new antibiotics, some governments have created incentives such as tax breaks and faster review by regulators. Researchers are beginning to explore alternatives to the drugs, such as harnessing viruses that attack bacteria, and using antibacterial peptides found in the blood of hardy animals such as alligators.

But bacteria will inevitably become resistant to new classes of antibiotics, too. “Creating new antibiotics is all very exciting and appealing, but it’s a losing proposition if we don’t figure out how to use our existing drugs better,” says James Johnson, an infectious-disease physician at University of Minnesota in Minneapolis.

That requires cracking down on the overuse of antibiotics in farm animals and in hospitals. And a 2013 study found that about half of antibiotic prescriptions in the United States may be unnecessary.

Governments are taking some steps: the European Union outlawed the use of antibiotics to help fatten up livestock a decade ago, and many other high-income countries, including the United States, are instituting regulations on antibiotic use. Ultimately, however — as the spread of mcr-1 shows — international cooperation to set up global surveillance and regulations will be necessary to prevent antibiotic overuse.