Commercial use of genetically engineered yeast to make medicine has modest impact.

When Paris-based pharmaceutical giant Sanofi started to sell malaria drugs made with the help of genetically engineered yeast in 2014, the move was hailed as a triumph for synthetic biology. The yeast was fermented in a vat to produce a chemical that Sanofi converted into artemisinin, which is used to make leading malaria treatments called artemisinin-based combination therapies (ACTs). Many hoped that the process would offer a cheap and plentiful supply of drugs to tackle a disease that claims almost half a million lives worldwide every year.

Yet Sanofi produced no ‘semi-synthetic’ artemisinin (SSA) at all in 2015, Nature has learned. And the company is now selling the manufacturing site in Garessio, Italy, where it made its SSA.

That such celebrated drugmaking technology — developed with the help of US$64 million from the Bill & Melinda Gates Foundation — stands idle illustrates the complicated web of economic forces that affects the market for malaria drugs. “This is a perfect example of how a new manufacturing process becomes extremely hard to scale up when there is a complex ecosystem of players,” says Prashant Yadav, a health-policy researcher at the William Davidson Institute at the University of Michigan, Ann Arbor, who studies the ACT market.

Before the advent of SSA, the only source of artemisinin was the sweet wormwood plant (Artemisia annua), the discovery of which won Chinese scientist Youyou Tu a share of the 2015 Nobel Prize in Physiology or Medicine. But the agricultural supply has been erratic. Shortages of A. annua send prices soaring, which attracts more farmers to plant it; their produce then swamps the market, depressing prices and triggering fresh shortages (see ‘A stable artemisinin market?’). 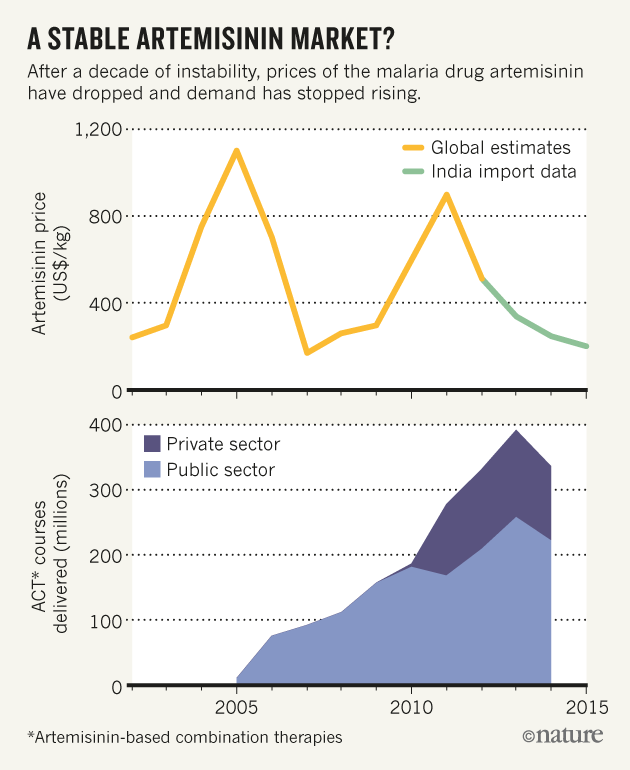 The synthetic-biology route promised to end this rollercoaster by providing a stable and reliable source of artemisinin. Sanofi developed the capacity to produce almost 60 tonnes of the chemical per year — about one-third of global need — and the company hoped to supply other ACT manufacturers with the raw materials.

“In reality, that has not happened,” says Yadav. Sanofi has so far used its SSA to make more than 39 million treatments of its own version of ACT — representing about 10% of global ACT demand — but has not sold the chemical to other drugmakers.

That is partly because of a glut in agricultural artemisinin. For the past two years, the naturally derived chemical has sold for less than $250 per kilogram — below Sanofi’s ‘no profit–no loss’ margin of around $350–400 per kilogram. “If that price is already very low and there’s a bumper crop, there’s no reason to fire up a fermenter,” says Jay Keasling of the University of California, Berkeley, who led the team that first developed the yeast strain.

But ACT manufacturers such as China’s Guilin Pharma and India’s Cipla are also reluctant to buy their drug ingredients from Sanofi, says Yadav, because the company is a direct competitor in the ACT market.

And Sanofi has not found it worthwhile to increase production of its own ACT because demand has plateaued. This is in part the result of growing efforts to diagnose malaria before doling out medicine: malaria treatments are often taken by people with fevers who do not actually have malaria, so more-accurate diagnoses help to reduce the number of treatments needed. Whether demand will rise again will depend on how international efforts to tackle malaria develop in the future, and how much funding will be available to purchase ACTs.

By July, Sanofi will complete the sale of its Garessio manufacturing plant to Bulgarian company Huvepharma, a contract manufacturer responsible for fermenting the engineered yeast in vats to make artemisinic acid — the precursor to artemisinin — for Sanofi.

Nicola de Risi, a manager for Huvepharma in Rome who will head the firm’s Italian division, hopes that by gaining control of the entire SSA production process (from yeast to final product), the company will be able to lower costs and make sales to other ACT manufacturers. But Huvepharma will switch to using plant-derived artemisinin if it cannot make SSA cost-competitive, de Risi says.

PATH, a global-health organization based in Seattle, Washington, which coordinated the development of SSA, says that it still considers the project a success. “Since SSA entered the market, we have observed better price stability, and there has been adequate supply of artemisinin,” it said in a statement.

“There is merit to the argument that SSA has contributed somewhat to stabilizing prices,” says Yadav. But the main causes of price stability, he adds, are the recent steady demand for ACTs and long-term purchasing contracts with ACT manufacturers, set up by the Global Fund to Fight AIDS, Tuberculosis and Malaria.

PATH and Keasling say that SSA was always intended to be a supplemental source to fill gaps in agricultural production, or to cope with spikes in demand. But Claire Marris, a sociologist of science at City University London who previously worked at the Centre for Synthetic Biology and Innovation at Imperial College London, says that in her experience, SSA is often portrayed by those working in the field as simply a low-cost, high-volume substitute for agricultural artemisinin. “It was constantly talked about,” she says. Now, Marris worries that unrealistic expectations for SSA’s achievements could damage public trust in synthetic biology.

When the Gates Foundation awarded the first of its grants for the SSA project in 2004, it explicitly aimed to lower the cost of each ACT treatment from $2.40 to “well under a dollar”. But the median price of Sanofi’s ACT had already dipped to $0.92 per adult treatment by 2012, well before the introduction of SSA, and it has changed little since then.

De Risi says that SSA production will restart later this year so that Sanofi can produce its own ACT treatment. “I think it’s good for synthetic artemisinin,” says Yadav, who points out that other ACT producers may be more willing to buy artemisinin from Huvepharma because it is not an ACT producer itself — and therefore not a direct competitor.

Meanwhile, Guilin Pharma and Cipla are making plans to develop their own SSA, and Keasling hopes that more research and develop­ment work could make the synthetic process cheaper in the long term. “I’d like to see SSA take over as the dominant form, and some day I think it will,” says Keasling. “But we have to be patient.”