The mystery of the expanding tropics

As Earth's dry zones shift rapidly polewards, researchers are scrambling to figure out the cause — and consequences.

One spring day in 2004, Qiang Fu was poring over atmospheric data collected from satellites when he noticed an unusual and seemingly inexplicable pattern. In two belts on either side of the equator, the lower atmosphere was warming more than anywhere else on Earth. Fu, an atmospheric scientist at the University of Washington in Seattle, was puzzled.

It wasn't until a year later that he realized what he had discovered: evidence of a rapid expansion of the tropics, the region that encircles Earth's waist like a green belt. The heart of the tropics is lush, but the northern and southern edges are dry. And these parched borders are growing — expanding into the subtropics and pushing them towards the poles.

Cities that currently sit just outside the tropics could soon be smack in the middle of the dry tropical edge. That's bad news for places like San Diego, California. “A shift of just one degree of latitude in southern California — that's enough to have a huge impact on those communities in terms of how much rain they will get,” explains climate modeller Thomas Reichler of the University of Utah in Salt Lake City.

Since Fu and his colleagues announced their discovery in 2006, many scientists have investigated the tropical bloating and tried to decipher its cause. Explanations range from global warming to ozone depletion or natural cycles that will reverse in the future. And there is little agreement on how quickly the border of the tropics is shifting: estimates run from less than half a degree of latitude per decade to several. At the more extreme end, the change in climate would be like moving London to the position of Rome over the course of a century. The problem is compounded by lack of consensus on how to define the tropics, which makes it hard for scientists to agree on the extent of the changes. Nevertheless, researchers investigating this phenomenon agree that it is real.

“There's a big need to be concerned about this issue,” says climate scientist Chris Lucas at the Australian Bureau of Meteorology in Melbourne. That's because of the possible impacts: some of the world's most fertile fishing grounds could disappear, global grain production could shrink and biodiversity could suffer.

At the same time as Fu first discovered odd patterns in the satellite data, Reichler noticed something unusual in the skies. He was researching the tropopause, the boundary between the lowest level of the atmosphere (the troposphere) and the layer above it (the stratosphere). At the Equator, the tropopause is normally several kilometres higher than at the poles, because warm air rises and pushes the boundary upwards. While analysing temperature data collected from weather balloons, Reichler had found that this equatorial bulge in the tropopause was expanding towards the poles, a sign that the tropics were growing. Fu heard about Reichler's data, and they decided to publish their discoveries together.

Ten years after they sounded the alarm, scientists are still struggling to work out what is happening. Last July, 50 researchers gathered in Santa Fe, New Mexico, to discuss everything that is known about tropical expansion — how to measure it, what is causing it and where the future border of the tropics might be. “We're at a stage where we recognize the problem is more complex than we originally thought,” explains the organizer of the conference, Dian Seidel, an atmospheric scientist with the US National Oceanic and Atmospheric Administration (NOAA) in Silver Spring, Maryland.

Some of the changes in the tropics could be a result of global warming. Reichler investigated that possibility in a study led by Jian Lu, an Earth systems scientist now at the Pacific Northwest National Laboratory in Richland, Washington. Working with Gabriel Vecchi, a climate scientist with NOAA in Princeton, New Jersey, the researchers looked at climate forecasts to see how warming might affect an atmospheric circulation pattern called the Hadley cell, which transports heat from the warmer parts of Earth towards the cooler regions (see 'Bulging waistline'). As part of the Hadley cell, warm, moist air soars skywards above the Equator and cool, dry air tumbles towards Earth at about 30 ° latitude in the Northern and Southern Hemispheres. That downward limb of the Hadley cell helps to create some of the driest deserts on the planet, such as the Kalahari in southern Africa and the Sahara in northern Africa, and it is one of the most common measures of the boundary between the tropics and the drier subtropics. 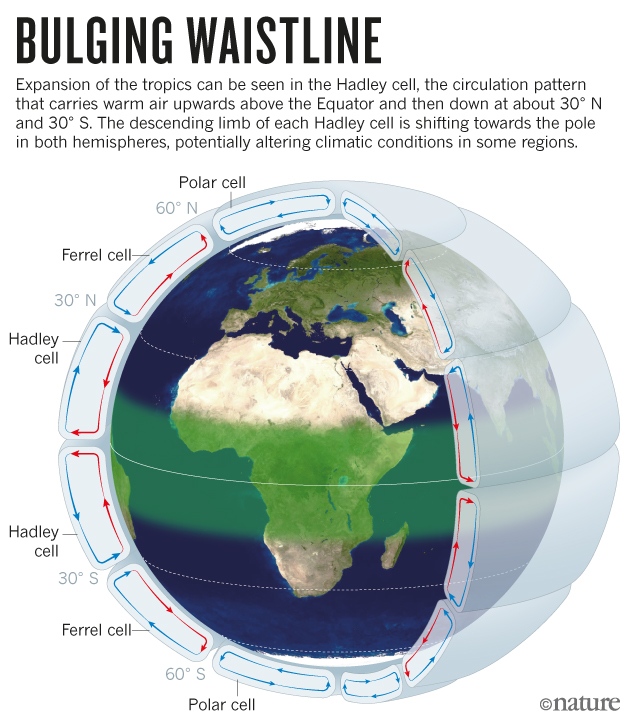 In their study, Lu and his colleagues found that climate models generally forecast that the outer edge of the Hadley cell will shift because of global warming. But the models predict a much slower rate of tropical expansion than has been seen so far — which has led researchers to suspect that something else is going on.

A common view, and one held by Lucas, is that natural climatic variability is playing some part. That variability could take the form of large-scale climatic cycles such as the Pacific Decadal Oscillation, in which temperatures in the Pacific Ocean swing between hot and cold across timescales of 15–20 years or more. “Or it could be in the form of much more random, chaotic noise,” says Lucas, who thinks that large cycles and noise together account for 50% or more of the expansion. Atmospheric scientist Darryn Waugh at Johns Hopkins University in Baltimore, Maryland, agrees. “It's a chaotic system, so some of the variability is just noise in the system.” If that is the case, tropical expansion could slow down or even reverse in some regions when those natural variations swing back.

Another answer might involve different forces in the Northern and Southern hemispheres. South of the Equator, tropical expansion has been strongest in the summer, and that leads some researchers to suspect that it is related to the pattern of ozone loss in the southern stratosphere. Pollutants chew up ozone molecules above Antarctica in the spring, which triggers circulation changes throughout other parts of the Southern Hemisphere during summer. The correlation with tropical expansion suggests that the two phenomena could be connected. What's more, climate models that factor in ozone loss are able to account for much more of the tropical expansion between 1980 and 2000, when the Antarctic ozone hole was growing bigger nearly every year, says Waugh.

In the Northern Hemisphere, a different explanation is called for because, in general, the Arctic does not suffer the same sort of ozone loss as the Antarctic. Research led by climate scientist Bob Allen at the University of California, Riverside, suggests that the culprits in the north might be black soot and tropospheric ozone — which are both generated by burning fossil fuels. Allen and his team ran simulations with a climate model that featured detailed atmospheric physics, and their analysis showed that black soot and tropospheric ozone have heated the atmosphere in the Northern Hemisphere and driven tropical expansion more than carbon dioxide and other greenhouse gases, particularly in summer.

Not everyone is comfortable with the idea that entirely separate factors could drive tropical expansion to such a large extent on either side of the Equator. Fu, for one, thinks it's unlikely given the similar patterns in the north and south. “If ozone depletion was dominating the expansion in the Southern Hemisphere in the past 30 years, would you see such symmetry? I'm not convinced,” says Fu.

Right around the time that scientists were first warning about tropical expansion, Lucas was experiencing what might have been its effects first-hand. During 2006 and 2007, Australia was deep in the middle of one of the worst droughts to have hit the continent since Europeans settled there. Lucas recalls driving from Melbourne to nearby Lake Eildon and seeing the once-brimming lake empty. Meanwhile, Melbourne's reservoirs were running low, and north of the city, forest fires raged in the mountains. The worst-affected regions of Australia — cities such as Perth, Adelaide and Melbourne — were south of 30 ° latitude, which suggests that the drying could be caused by a shift in the position of the Hadley cell and the rain-bearing jet stream. According to research published in 2010, southeastern Australia has been invaded by a drier climate from the north in recent decades, which has greatly reduced rainfall. “We can't say that this is exclusively due to tropical expansion, but it's certainly consistent with tropical expansion,” explains Lucas. “And our concern is that southeastern Australia is going to keep getting drier.”

Elsewhere, there is evidence that tropical expansion is affecting the ocean. Where the Hadley cell descends, bringing cool air downward, it energizes the ocean and whips up currents to high speeds. This energy powers the upwelling of cold, nutrient-rich waters towards the surface, which feeds some of the world's most productive fisheries. But there are hints that some of these regions are suffering because of shifts in the Hadley cell.

Edward Vizy and Kerry Cook, both at the University of Texas at Austin, have found some unhealthy signs in the region of the Benguela Current, an area of coastal upwelling along the coast of west Africa and south of 30 ° latitude. According to Cook, the currents of that entire region have shifted over the past 30 years. One effect is that the upwelling has weakened, with worrying implications for the region's fisheries and biodiversity. Cook says that the same could be true of open-ocean upwelling systems, which are more susceptible to changes in the position of the Hadley cell.

These upwelling zones could move south over time, or get weaker or stronger, depending on what happens to the Hadley cell, says Cook. In any case, it means that fishing communities that rely on these resources will not be able to count on traditional patterns.

On land, biodiversity is also potentially at risk. This is especially true for the climate zones just below the subtropics in South Africa and Australia, on the southern rim of both continents. In southwestern Australia, renowned as one of the world's biodiversity hotspots, flowers bloom during September, when tourists come to marvel at some of the region's 4,000 endemic plant species. But since the late 1970s, rainfall there has dropped by one-quarter. The same is true at South Africa's Cape Floristic Province, another frontier known for its floral beauty. “This is the most concrete evidence we have of tropical expansion,” says Steve Turton, an environmental geographer at James Cook University in Cairns, Australia.

Turton worries that the rate of change will be too rapid for these ecosystems to adapt. “We're talking about rapid expansion that's within half or a third of a human lifetime,” he says. In the worst-case scenario, the subtropics will overtake these ecologically rich outposts and the hotter, drier conditions will take a major toll.

For the scientists working in this field, communicating the threat of tropical expansion will be tricky, given the level of uncertainty. “It's frustrating to see how much work we have left,” says Thomas Birner, an atmospheric scientist at Colorado State University in Fort Collins and one of the conveners of the Santa Fe meeting. One outcome of that conference was an agreement that scientists should compare the various metrics for measuring tropical expansion in the hope of agreeing on the best way forward.

More time will also help. If tropical expansion continues at a fairly constant rate, says Waugh, there will be less of a chance that natural variability is the main culprit, and the finger will point more strongly to other causes.

But that long wait for an answer will be no comfort for the residents of cities such as Santiago, San Diego and Melbourne, and for the billions of others who live near the boundary between the tropics and subtropics. “We need to understand this issue,” says Lucas, “to have a sustainable civilization there.”